So far today I’ve seen a lot of retardation. Even more so then most days, and so I’ve decided to share it with people out in Internet land in hopes that it will help make me feel better. Of course the names had to be protected those in question, but anyways here we go.

First up, a fellow got a computer from a police auction. At first when he came in to see if we fix X-Blades I thought he meant Blade Servers the way he was rambling on about a front panel controller that showed temps and fan rpms. He brings it in and its just a crappy gaming case with fans and windows that’s called an XBlade. Still he’s going on about how he went to the company that made it, blah blah blah the long story short is that he wanted a hard drive installed, windows installed, and the front panel display hooked up. I opened the case and noticed that the temp sensors that were running to the hard drive were cut, as was the SATA cable. No biggie, the front panel won’t read the drive temp, but it will still work. So I put the new hard drive he brought in it, were the cops had amputated the previous drive for its role in what ever illegal activity it had participatedin. I assumed it was just a Windows install, and had not tried to turn it on tell this point, after hitting the power button it did not post. Crap. Okay its bad RAM/hardware somewhere. Nope, nothing changed and still no starty. I looked up by the power managment on the board and seen this… 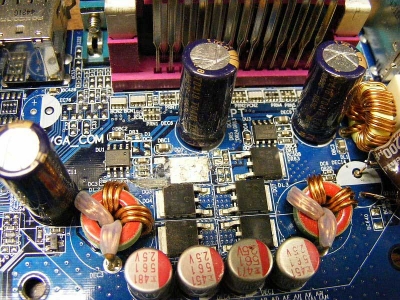 COOOL!!! Serously, wtf is this? It looks like someone went all Gary Busey on it. Its all scared, a lot of surface mount resistors are MIA as well as a some other important goodies. Also what was going through someones head to when they patched that capacitor in?! I mean really, what the crap is that. Instead of just de-soldering the cap from the board they soldered copper legs to the board, then another capacitor to those? Argh. After further checking the board over, a regulator on the north bridge looked all burnt and cooked, which meant that who ever did this may have cooked more then the board in trying to patch it up. He was more concerned about the crappy front panel thing then the well being of the board when I told him the diagnostic. Sigh.

Okay here’s another one. A guy came in and dropped off his machine saying that he could not connect to the Internet on dial up. Computer passed all the test I threw at it and the modem was fine. I tried connecting a couple times before realizing the guy put his own home phone number in as the access number, and his name as the user. Which meant I called his house 8 times with his own computer, and if he had tried to use it he would have got a line busy error. Narf! Called him up and explained that it did not work that way, and you actually had to pay a company to provide you with Internet access. Not just punch your own info into it and hope for the best.

Last one, an old one but a good one. This guy brought this machine in because it stopped booting into Windows “Could not find boot device” etc. etc. When one of my co-workers popped the case off the front of the poor Dell it was all rusty and corroded. The only logical thing that any of us could think of was that the machine was in a basement that had flooded. No biggie, it had probably killed the drive and that’s why there was corrosion on the hard drive controller board. Look at this thing… 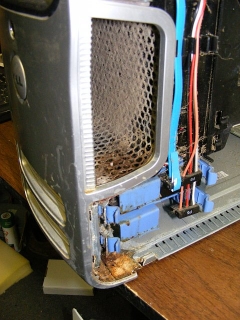 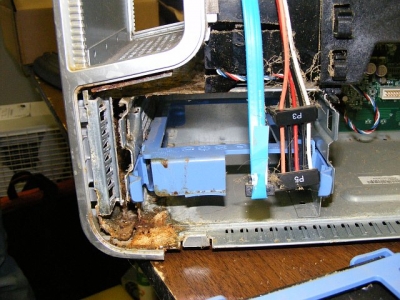 So when Travis asked what had made the front of this computer he was working on all rusty, the guy said ” Oh, must have been our dogs. They pee on everything.” I swear he said it like it was nothing. Like its okay to have dogs wandering about your house pissing on things until they start corroding from the pure amount of piss that’s been put on them. In what world is that an okay thing?  I’m so glad I did not have to work on that one.

I’m done, I think I’m going to stare at failblog or play Ski Free for the rest of the day now.