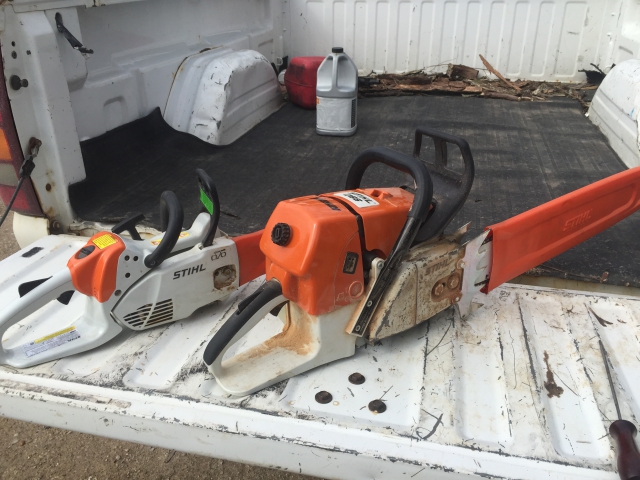 I’ve been a bit lazy over the past year and haven’t put anything new up in quite a while. So what better way to kick things off again than with a a chain saw project started back in November of 2015.

So back in November of 2015 I was wasting time on Ebay like I normally do, and was half looking at random Stihl saws for something to play with. And mixed into the Stihl listings were all these dirt cheap china parts. $12.00 for a recoil, $75.00 for a full crankcase/lowerend, handle sets for $29.00, etc. “Ha, that stuff can’t possibly be worth wasting time with” I thought to myself. But the more I started seeing how expensive beat to death 066’s were, the more the cheap knock off parts started to kind of interesting. Most of these listings seemed to all used the same product pictures, but from different sellers with their own water marks (actually all parts were from “FarmerTec”, more below). Such as: 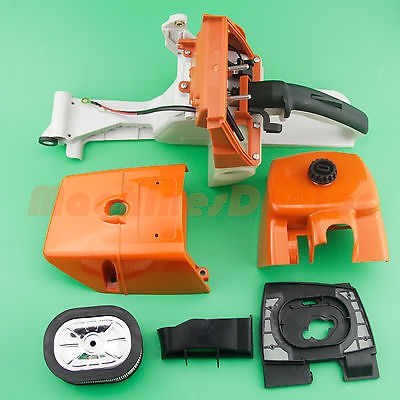 So some more digging and I found that while these knockoff’s can’t import an entire saw, they seem to be able to skirt around some rules by offering just parts. For example here’s Hutzl’s store for their Stihl 066 stuff- http://stores.ebay.com/HUZTL-chainsaw-parts

The gears in my head started turning, and for roughly $250-ish it looked like I could build a bastardized Stihl 066 frankensaw brand new! I was very curious how chinese clone parts would hold up over time, in the past with Harbor Freight motors and Lifans I’ve never had any problems, would the 066 parts be the same? Only one way to find out!

While I trust most of the clone stuff, for this project I decided to kind of cheat a bit. I ended for about 25 bucks ordering a real Stihl 066 lowerend. This gave me a valid serial number which made me feel somewhat warm and fuzzy inside and also a real Stihl crank and rod. As a side note, the Stihl 066/660 was built forever. There are several variations in the entire model run, so if you use a Stihl crankcase as a base make sure you know what your doing. If you go the full china clone route there should not be any issues. With the real 066’s/660’s the earlier models have a shorter length crank shaft, narrower crankcase. Also between all these there are about 7 or 9 ignitions with various coil/flywheel combinations (not mentioning the Arctic models), so just be aware.

Crankcase/crank, crank shaft seals/gasket, bar/chain, chain sprocket cover, flywheel, and an NGK plug since the china one looked like it was made out of playdoh. Also the rings in the 56mm big bore kit looked not well, so I did fork over 13 bucks for a set of Caber’s.

The rest of the bits were all ordered via slowboat from, well… Which, I must say, arrived much quicker thank I would have thought, roughly a week and a half or quicker. One thing that did become clear though, all these knock off parts are made by a company called FarmerTec. 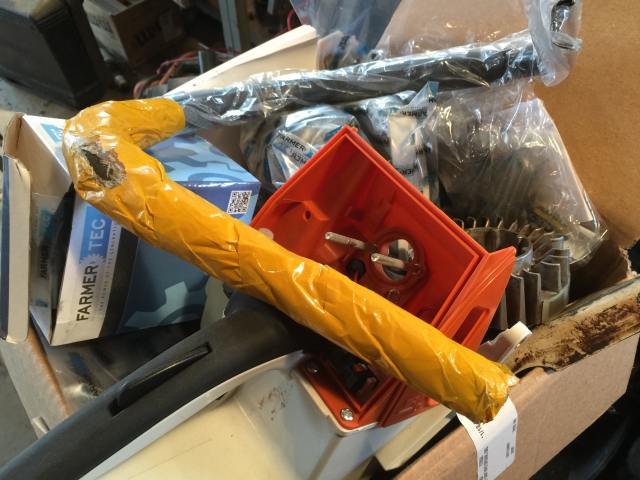 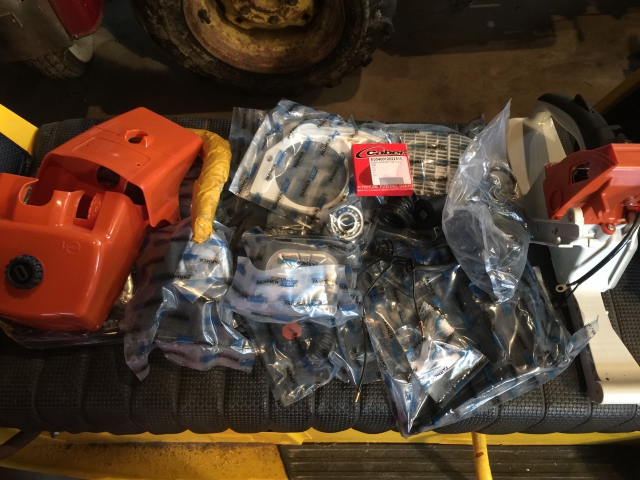 Parts showed up safe and sound, no issues at all. Quality on them was pretty solid. Although the rubber was a little questionable.

Cleaning up the crank- 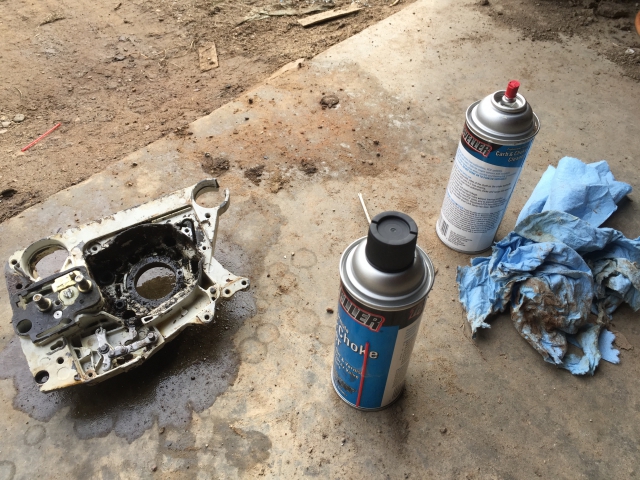 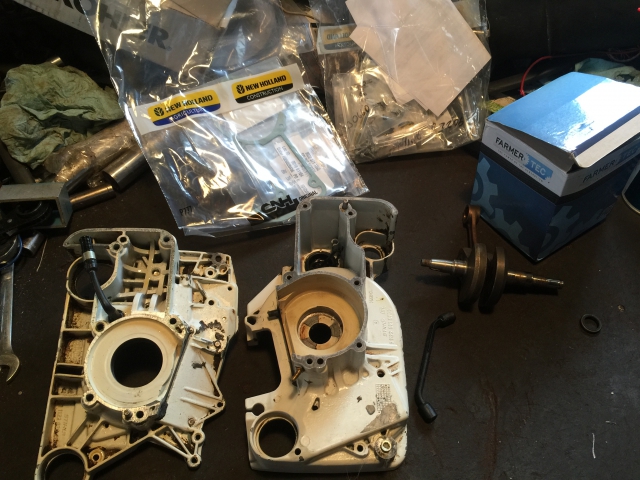 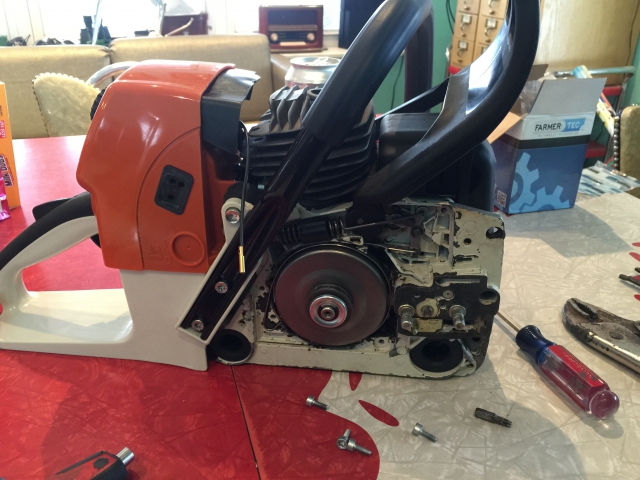 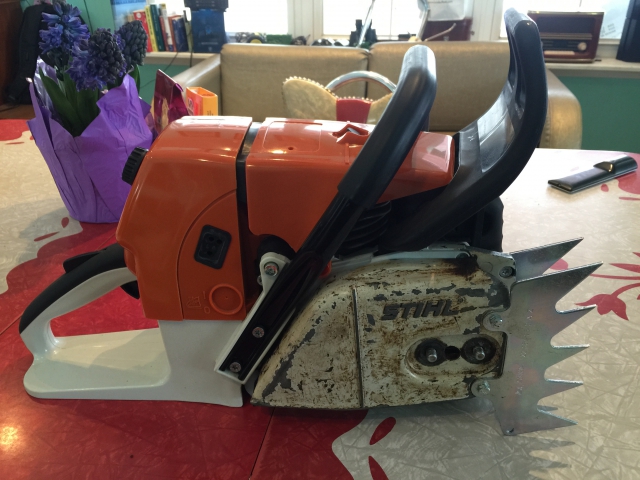 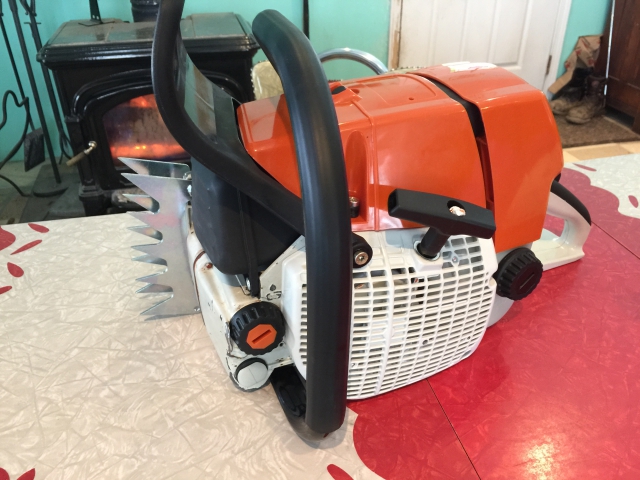 After a year of use-

The saw runs great and cuts like a rabid beaver, does have a few little kinks but over all I’m pretty dang happy with it.

Thoughts on the clone parts-

All included rubber is garbage. Bar and motor mounts seem to be holding up but may give out and tear. I’m scared of the gas lines cracking eventually and it leaning out, but may replace them before that becomes an issue. But seriously don’t use the included crank seals. After seeing how the other rubber stuff is weathering I’m glad I didn’t. Also the oil cap rubber seal seems to leak like crazy. For example, here is the air dam/plug cover chewed up just from vibrations: 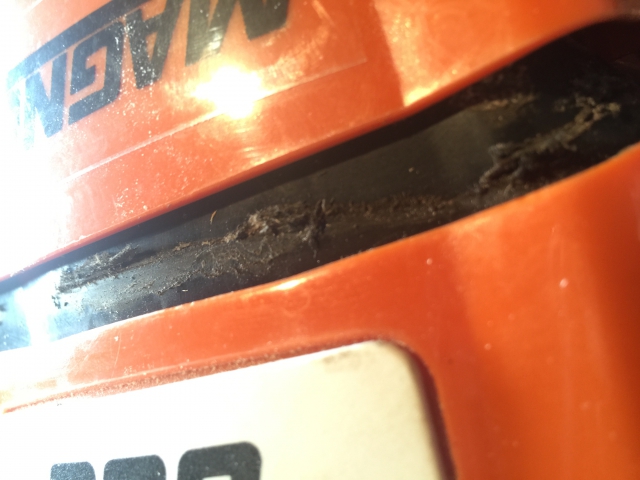 Bolts! They rattle out, but like any big two stroke single I guess this is to be expected. Part of this is from using an older crankcase that had some bolt holes stripped out already. Can’t really fault this on the clone parts. Although the muffler cracked after the bottom came loose, kind of cheap: 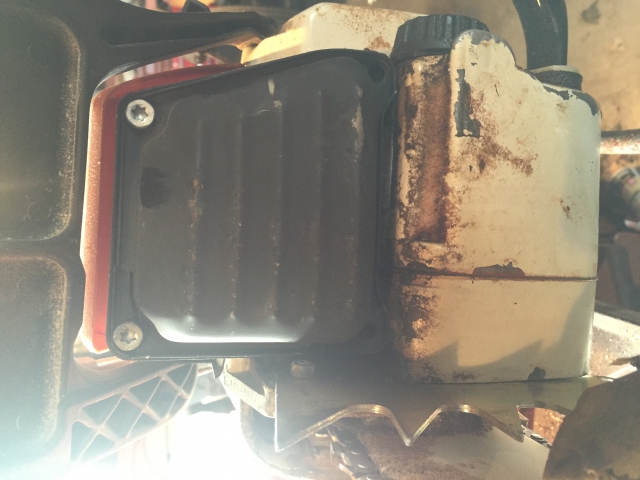 Also on the crap list of things not to buy or use beyond the rubber bits, the recoil. Get a real Stihl recoil or you will hate using the saw. The $12 ones on Ebay are $12 for a reason, and with a saw this big back fires or just compression will destroy the recoils little dawgs in no time. The 56mm big bore kit. If you watch the intake and exhaust ports while assembling, you will notice that at TDC it does go full open port, leaving a gap of about 2-3mm. Doesn’t seem to effect how the saw runs but maybe a 54mm kit would be safer if your concerned about it. Orange in the plastic is also a little duller and darker, doesn’t have the sheen or vibrancy of real Stihl orange.

To sum it all up, very happy with the franken 066. It’s deafening loud, torquey, and somewhat scary. If you build one, use real Stihl rubber bits, real recoil, decent rings, and it should hold up just fine. If your an actual logger or can afford it just go buy an 066, but for bigger firewood duty and around the farm its a good saw.