Long title, eh? So recently I ran across post on Petapixel.com about using anamorphic lenses with DSLR’s for ether video or stills. However the cost of most anamorphic lenses are crazy high, it seems that the demand has really ramped up on them. So while trying to figure out a cheap way around the problem, I decided the best bet was to head straight into the depths of Ebay and see what floated to the top.

After a good long while of poking around I finally found something cheap, it was a Bausch and Lomb Cinemascope 2x anamorphic projector attachment for roughly about $25. It was not pretty, but looked to be usable still and at $25 bucks I felt it was safe enough to just take a gamble on. So the big old lens showed up a few days later in the mail, and holy cow was it built well. This is not a light lens. This is a very, very, heavy lens with some seriously thick glass. Its really quite impressive. When this was in use, it would have been mounted on the front of a projector to take a squashed Cinemascope film, and stretch it to twice its width creating the more familar wide screen films we are used to seeing. Its kind of neat to think about how many movies may have filtered through this lens over the years. More information can be found here

Vid-Atlantic makes the most popular Anamorphic lens clamps and accessories for anamorphic lenses, so after a quick few measurement an order was placed for their 72mm Anamorphic Lens Clamp, and another for a 50mm to 72 mm step up ring from Adorama so that I could attach the whole mess to the front of my 50mm lens. So here is the whole kit ready to go; 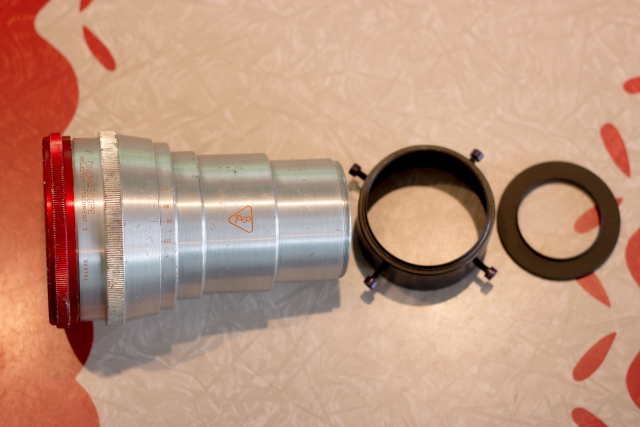 And here it is all assembled and attached to my Canon 20DA along with the little plastic nifty 50mm 1.8. 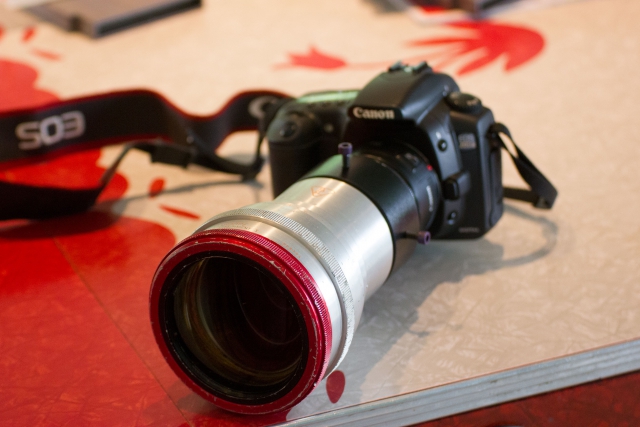 From here out I was using my Canon T2i in place of the 20DA.

First things first, for projector attachments you need a lens between the anamorphic lens and your camera. This is because all the aperture control and half the focusing has to be performed on the camera lens.

If you end up with a heavy anamorphic lens, or a B&L like I got, make sure the lens you attach it to has a metal body and is well built. There is a lot of weight hanging off the front of your camera with the adapter/anamorphic attached, and using the nifty 50mm with its plastic body is a bit scary. It always seems like its right on the edge of breaking in half or busting something. Also when picking a lens to use make sure you get one that doesn’t have a rotating face, as the anamorphic lens has an actual up and down, and if your lens face is spinning its also going to spin the projector lens and mess its alignment all up. Also turn off autofocus if your using a newer lens, you don’t want to kill your lenses focusing motor or gears having it trying to move that giant chunk of aluminum you screwed to the front of it. One more thing to note, depending on what anamorphic lens you wind up with, you may not want to go any wider then a 50mm or 55mm lens as vignetting can occur in the corners. My 70mm works fine, but the nifty 50mm as you will see is right at the limit and 95% of the time cuts the  corners out. Vid-Atlantic recommends getting a Helios 40-2, which I assume is because of build quality, flares it produces, and focal range. Flares are somewhat dependent on the lens you choose as well.

Anyways, with that out of the way time to go shoot some stuff. First thing that you’ll notice is that images seem to be harder to focus, because they are squashed horizontally. Its can be hard to get a feel for when your in focus, and when your out, although I imagine with practice that can get better. Shot composition gets a little trick because of this, since everything you see on the camera is distorted, but again with practice it gets better. When shooting the focus ring on the lens is hard to reach behind the big old B&L adapter. So much so that I resorted to jiggling my camera vertically most of the time in order to rack the lens out since I couldn’t get my fingers on it. I assume that part of this was the poor little plastic bodied lens binding from the weight. I ran into a few times where the lens step up filter was trying to unscrew its self, or times where it became loose. This can really upset a picture if your anamorphic rotates away from its correct position. Think of it like taking a square thats your picture, then if you turn the projector lens on the filter its squashing that square into a parallelogram. But a quick twist of the B&L straightened things back out.

Focusing I would say was the biggest issue. I have heard that some people say these lenses are fixed for 50′-200′ focal ranges as that’s the distance they would be normally be projecting to a movie screen. However, I was getting shots at 15′ and even 5′ sometimes that were clear. It was much easier to focus at 50′ plus, but closer shots did seem possible. The close shots seemed somewhat random though as most would up blurry, so more experimenting is needed.

On to the shots!

Edit: Threw in a few flair shots since some people may be interested in them. Its actually rather hard with the 1.8 mounted to get it to act up unless you shove its nose directly into the sun.

You can see a few of the corners on the above files are a bit cut off with the Canon 50mm 1.8, but it seems to shift a bit and sometimes goes away depending on the lens rotation. As before, a longer lens like a 55mm+ would clear that up.

So what do these images actually look like when your looking through the view finder and on the camera? Here’s an example of one that I liked and how it turned out: 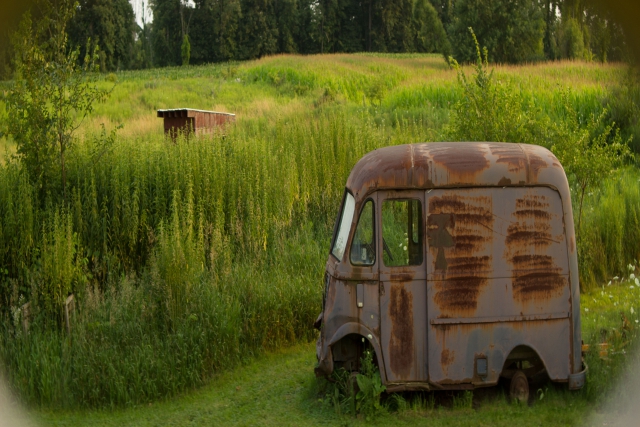 Remember that when shooting with an anamorphic lens your camera is taking in the same amount of data it normally would for videos or a photos, when you stretch it your losing about half your horizontal data/quality. Just something to keep in mind if you notice the quality seems a little off to what your used to when your reviewing your shots.

And here is a short, but bad test video I did with it on the T2i. I was just holding it with no support so its a bit wobbly and out of focus;

Farming can be hard work, especially if your tractor turns into a tricycle.

Forgot to post this a while back, but had some fun with my Canon out in the middle of a field. Lots of fluffy clouds rolling by between storm fronts.