Michigan, its freaking -14F outside. Windchill makes it near -35F. Getting ready for work, its around 11:00PM on Tuesday.

Truck won’t start. Fires sporadically but its just too cold for it. Heater blend door was set to defrost but for some reason decided to spazz out and is clacking loudly from its home under the glove box. Give up and borrow my folks Tahoe and go to work leaving my truck behind.

Too cold to work on truck when I woke up around 4:00PM, wind still blowing strong. Tahoe is now gone on a trip leaving the only thing I have keys to and that runs my 1954 Buick. Figure screw it, there is no salt on the roads anyways since its too cold for it to do any good, so I jump in it. Its now around 7:00pm at night and about -5F out. Surprisingly Bonnie fires right up and seems rearing to go. Let her warm up for a good 20 minutes before pointing her out into the cold. Heading slowly down the road it becomes apparant that the heater works less then I remember it and I no longer can feel my feet. The defroster is blowing enough to keep the lower half of the windshield clear but the upper portion looks like some form of ice and crystals that you would see in National Geographic.  While heading down the road it breaks through a few drifts with little fan fair, passed a few trucks that seemed very confused to see a 54′ Buick out in this weather.  Get to the store, get something for dinner, and then head back. On the way home I found that the Buick also does not like the cold as it decides to stall in the middle of an intersection. I get out and eventually push it clear and then wait in the dark until the stupid starter switch on the gas pedal resets and decides to crank the starter over. After around 10 minutes it decides to work again and Bonnie makes it back into the safety of the garage. At this point I give up, but my sister takes pity on me and lets me borrow her Jimmy to get to work.

Next morning. Out of work, its -15F out. Decide that enough is enough and decide to work on my truck. Its in the middle of the driveway on an ice patch and behind a 4′ tall snow drift. I climb under it and begin taking the starter off. After 10 minutes cant feel my fingers, retreat to house. Back outside, fight it for another hour taking breaks to stay warm. Give up as the solinoid is no longer even clicking, and its cold. VERY, VERY, COLD. At this point I can not feel my face, back, butt, legs, hands, or feet. Climb in bed and after an hour of watching McHales Navy I finally can feel my back. I did not know that was a thing that could go numb. Hitch a ride into work later that night, pick up a new starter on the way out of work.

Decide that I will make my truck run as this is getting old fast. Its now 7 degrees out according to the sign at the bank, and winds are whipping stronger then they were a few days ago. It feels the same as it did yesterday, although its supposed to be the warmer. Climb under my truck, start working on it. Trying to get the old starter off again, getting cold, lost feeling in my hands after 10 minutes so I go inside. Back outside, starter almost out, back inside. Again, outside. Old starter is now off, going to put new starter in. Laying under the truck, on the ice, can not feel my back, legs, butt, or feet again and my hands are going numb. Try threading the eyelet of the battery cable onto the solenoid with gloves, not working. Take off gloves, touching anything metal feels like getting burned. I cant support the the starter in one hand while trying to put the cables on, old habits kick in, I put the 13mm wrench in my mouth to hold it to free my other hand.

Wrench hits my tongue and that cold feeling instantly tells my brain what I have just done. I freak out a bit and instantly try to pull it away, while dropping the starter which hits me in the face. I slightly rip the skin off the end of my tongue, which hurts, causing me to close my mouth on the wrench. My mouth is now closed around the wrench and it is firmly frozen to my lips. Great.

Lying on my back staring up at the truck I decide to finish this. Get the stupid positive cable on, and then wrestle the solenoid exciter cable on. I’m really starting to feel the cold now, wind keeps blowing snow into my face from the drift my truck is up against.  Grab on of the big long bolts that hold the starter on, try to line it up while looking directly up at it. Starter wobbles and the bolt falls out of the hole it was started in and hits me square in the eye and proceeds to roll down my coats collar and disappears. Look over and grab the other bolt which actually starts and threads in. My hands are now numb clubs from not having gloves on.

I get out from under the truck, with wrench still frozen in my mouth and attempt to find the bolt that fell down my collar. As soon as I stand I feel it slide around the front of my shirt collar, and then the stupid ice cold bolt runs down the front of my shirt, and into my pants. While the bolt proceeds to freeze the crap out of my crotch, I wrestle around trying to dig through my bibs to get to my pants to recover the bolt. It was very very cold.

Back under the truck, last bolt to go, wrench still in mouth, and my body and hands mostly numb I finally get it started and the new starter is bolted in. The truck starts, finally something has worked. While taking care of tools my hand melts some water and a wrench briefly decides to freeze to it as well. I sigh and continue to get things cleaned up from underneath my truck. 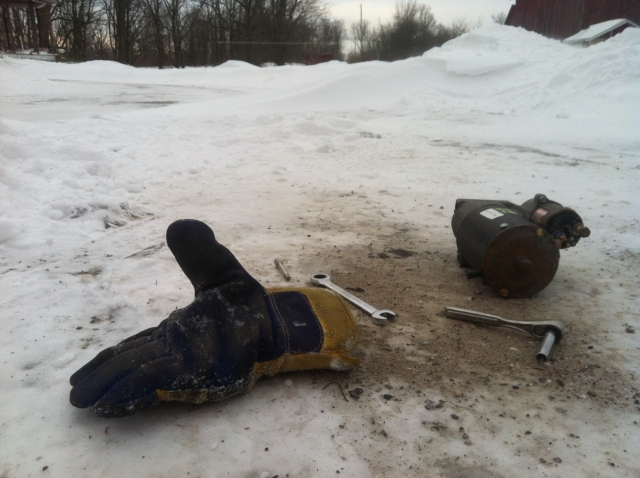 Back inside I finally start to get warm. Jump in shower with wrench still frozen to my mouth, it finally pops loose when the hot water hit it. Hot water instantly seems like a bad idea when it hits my feet, back, and hands. Feels like what I imagine falling into a cactus must feel like as all the frozen nerves start to wake up, and are instantly not happy about it. Pin pricks everywhere. I turn the water on cold and it actually feels warm. Eventually thaw out. Try to eat Cookie Crisp while watching the Today show. Can’t taste them due to the wrench that froze to my tongue.  Realize I never will be as cool as Al Roker. Go to bed.

Fun was had by all, except the two guys that exploded in the helicopter.