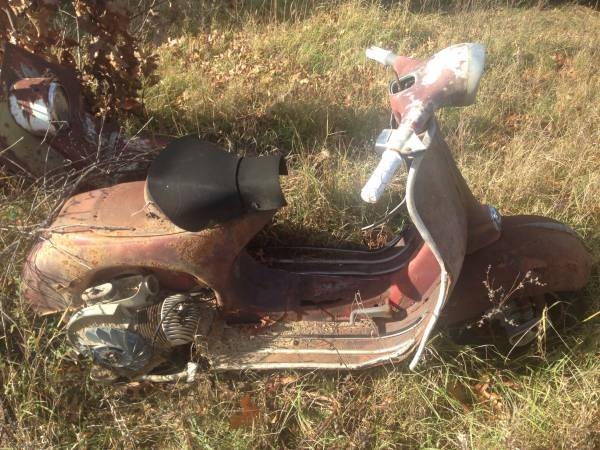 Found this guy on the local craigslist for not much. Its a 64′ Sears AllState/Vespa VBB, and is in very, very, very, poor shape. It must have been setting outside for the last 30 or more years as its got some issues. Motor wiggles, but is locked up and full of sand from sitting in the dirt. Back tire was rotted off the rim so I picked up this amazing teal wheel with a IRC tractor grip tire on it like the ones that came on z50’s. So far I’m thinking the Pigeons are built like tanks compared to these guys, I never realized that they had a monocoupe/unibody frame. I don’t care much for two strokes but have always wanted a Vespa to monkey with so it should be fun. Thinking of adding a tube frame under from the fork stem, down the tunnel, linking in the swingarm pivots, then running up to the seat and the rear shock mount. This way it can stay just as nasty rusty as it is and still be sturdy. It would be nice to ride it down the road without fear of hitting a bump and it folding up on you like a banana. Hopefully this summer there will be tinker time to work on it after the Pigeon is done. 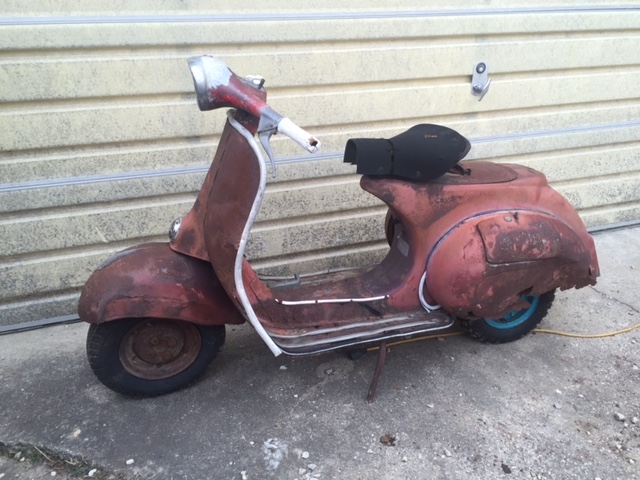 This has been a long time coming, but last fall I finally got around to shoving a running motor into the guts of my old Mitsubishi C-75. Please note that this is the first part, in which everything breaks and I end up redoing and rebuilding much of what I had setup. 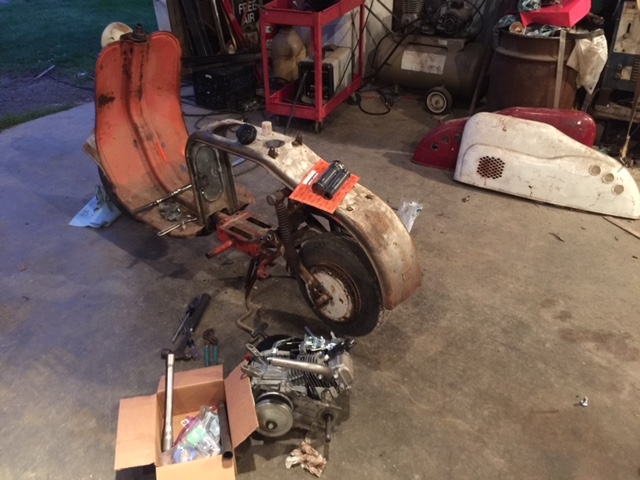 After trying for many years to source correct parts for the scooter I finally figured screw it, this things going to move under its own power and be reliable. I have one of the original running motors in my C-80 and was never too impressed with the thing. It moved that fat pile of Japanese steel down the road okay but if you hit a hill or a head wind you were rolling back down into the mid 20’s. After being ran down a few times by the neighborhood dogs while climbing a small hill pretty much clinched my sourness at the power train. Not to mention the coils on those things seem to fail all the time with the varnish that’s supposed to keep them from grounding internally giving out and allowing it to slowly internally arc its self into a pile of melted copper and goop. That is if the motor doesn’t back fire and damage the clutch/kickstarter/centrifugal clutch assembly. Seriously, whoever came up with that one needs a talking too.

Anyways moving on. First I needed a new motor for the pigeon that would fit, and like most projects I ran down to Harbor Freight and picked up a 6.5HP Predator/Honda GX200 clone for $99.00. These are great little motors and really can’t be beat for the price. Plus they have a huge after market for performance parts and goodies from the karting guys.

So first, where to put this thing, to get the motor installed I made a small mock up stand on where It would go. It had to be up in the air so that the PTO/output of the planned Comet Torq-a-verter would be about even with the swing arm pivot point. 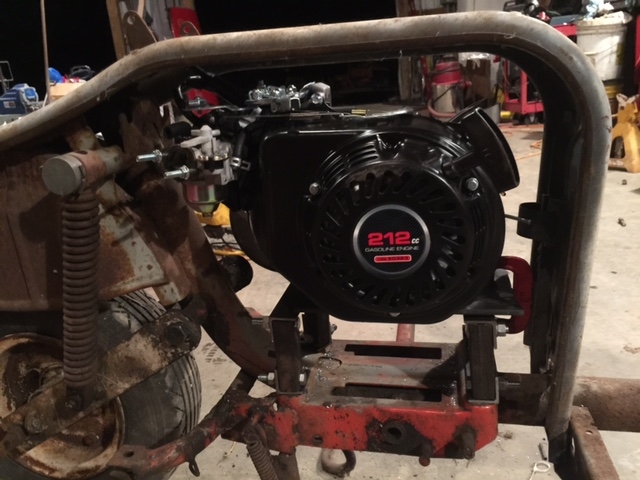 There was not a lot of room in the belly of the Pigeon which made trying to work out where everything would go kind of a  pain. The 6.5hp Predator was actually just right size wise. If you tried to stuff anything bigger in there your going to have some problems with width. 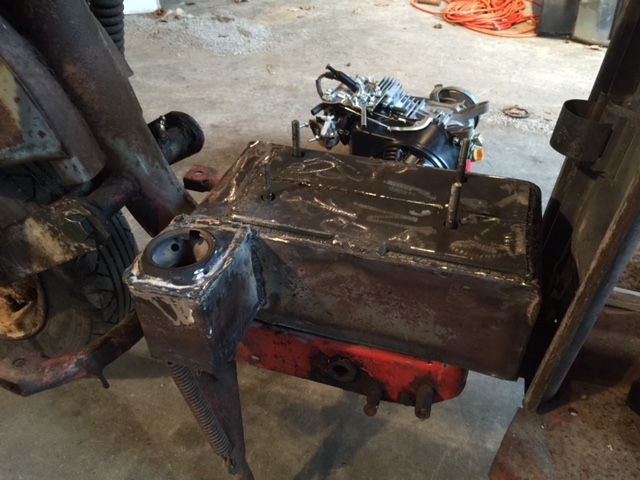 The gas tank was a bit of a problem since space was an issue. On the first build I ended up making this tank, which I was very proud of. If you are rebuilding your Pigeon, DONT BUILD A MOTOR MOUNT TANK. It worked great for a few short trips. But then, the steel starts to flex from the torque of the engine making cracks and you end up driving a dripping molatav cocktail. Its fun! Just don’t slow down until your near some water or dirt so you can put the fire trail your leaving out (chain’s make sparks btw). For a brief moment that day the C-75 was trying its hardest to imitate the Delorean from Back To the Future. 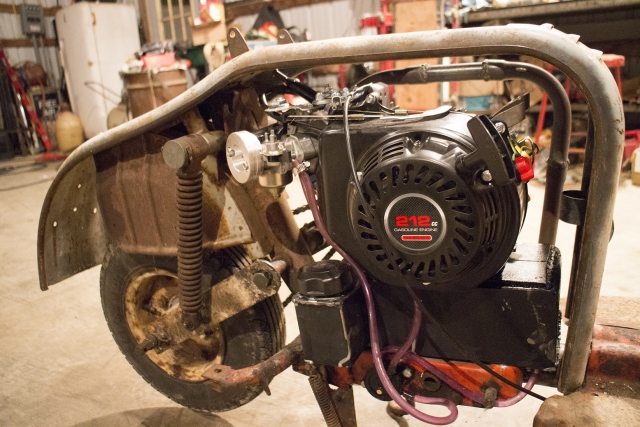 Just a simple Briggs and Straton fuel pump with a pulse jet intake manifold for vacuum runs the fuel up from the tank to the motor. I got the intake horn, pump, and intake manifold all from NR Racing. They have a lot of neat goodies for these little motors at reasonable prices. 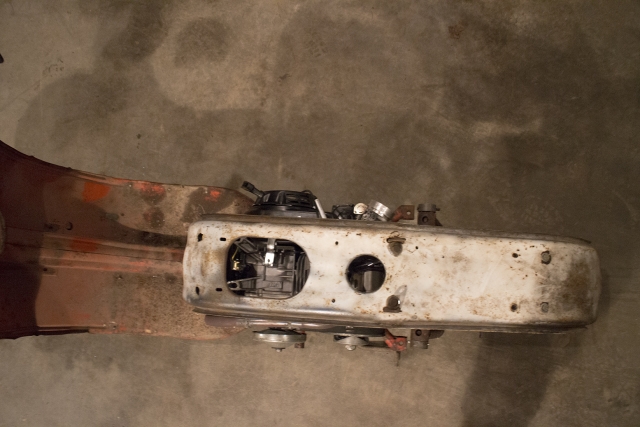 Motor on tank and a shot from above to show how much space is available on the sides of the bike. Pretty tight. Which leads to another problem with putting a 6.5HP clone and Comet clutch setup in a Pigeon, the swing arm/rear sprocket does not line up by about an inch. There is no room to move the motor to correct for this. So, I solved the issue by moving the swing arm to the side using a Sawzall to wack away an inch of swing arm bushing on the right side of the scooter, and spaced it with a bearing on the left side. 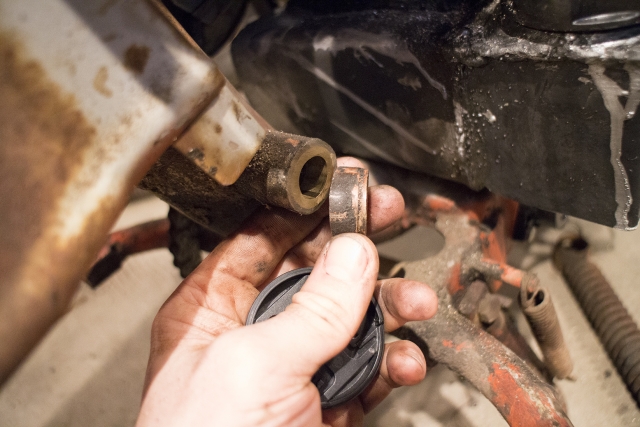 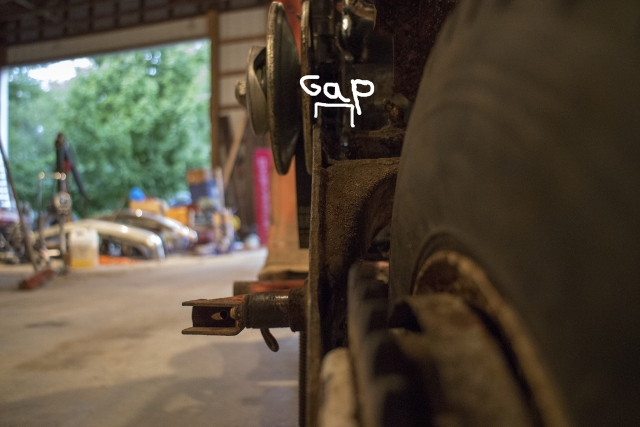 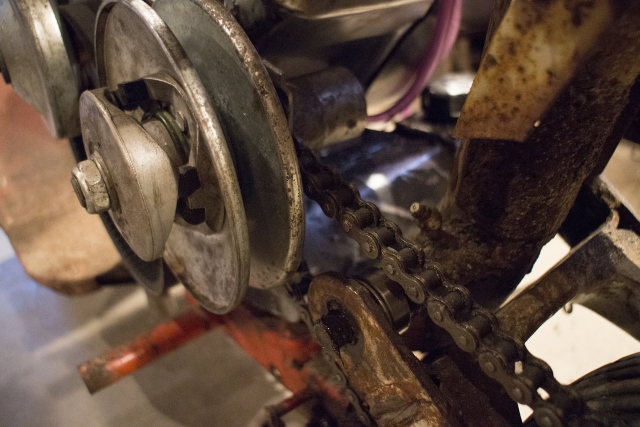 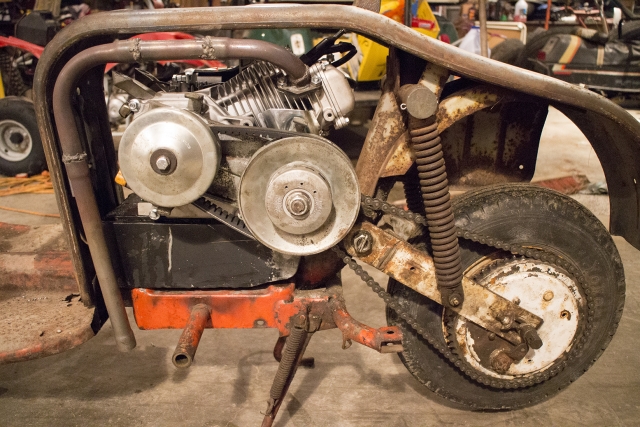 That bearing which you can see in under the chain acts also as a roller which is kind of handy and keeps it from eating the swing arm when it gets loose. 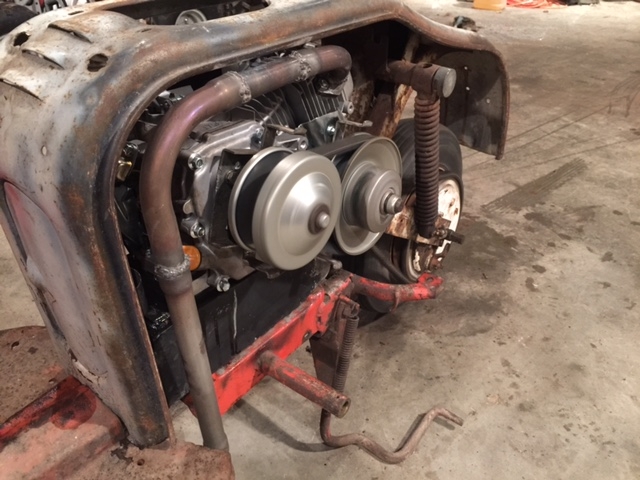 Fired up and running! Things are moving! 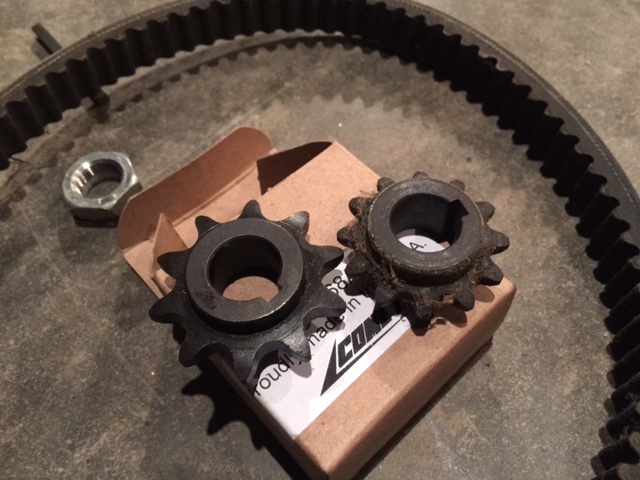 I did re-gear the comet Torq-a-verter I had with a larger sprocket so the gearing would be a bit taller. Seemed to be about right as the scooter cruises around 35-40ish which is fast enough for dirt roads and 8″ tires. 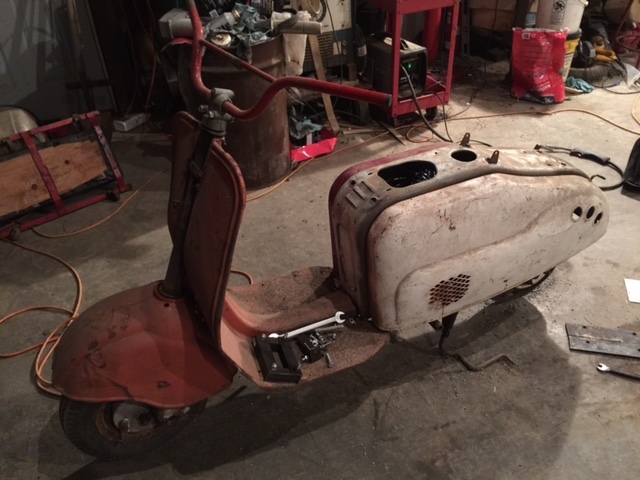 Now that the sheetmetal is fitted and the motor mounted its on to fix the goofy old dirt bike handle bars which look.. yeah. Not what a scoot needs that’s for sure. The C-75 ended up getting a set of Triumph T90-T100 bars from Low Brow Customs (a lot of stuff like the grips, cables, etc came from them and I can not recommend them enough). They seem to match the bend that the original Pigeon bars had. If you want some there are here: http://www.lowbrowcustoms.com/triumph-reproduction-handlebars-7-8-t90-t100.html 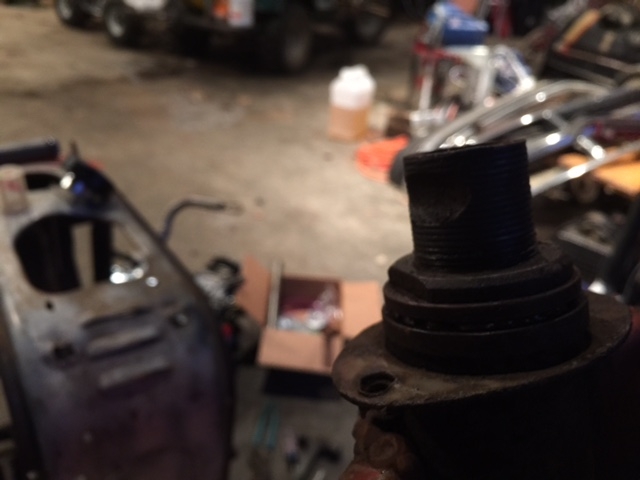 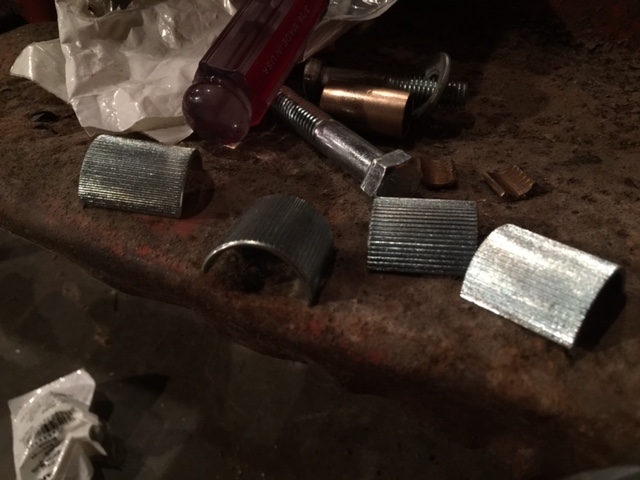 Some 7/8th bar to 1″ bar shims for the clamp. Work great, no slipping so far and pinches those bars down tight. 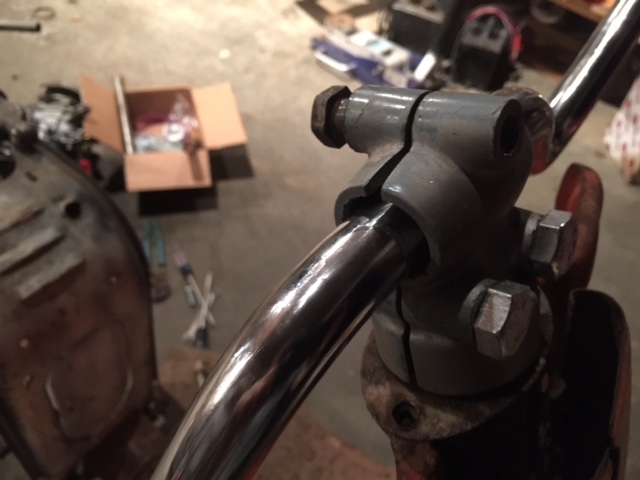 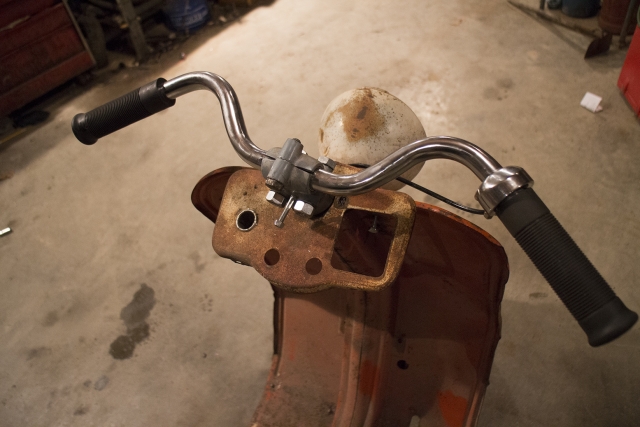 Almost like they belong there. So now to the first test ride. The pigeon managed to get me to the corner store and back two or three times with this setup until things went down hill. The Comet Torq-a-verter I had was an older unit with stamped steel backing (which is no longer made). And it died. Pretty hard. Made some sparks which then led to the above indecent with sparks and flaming awesomeness. 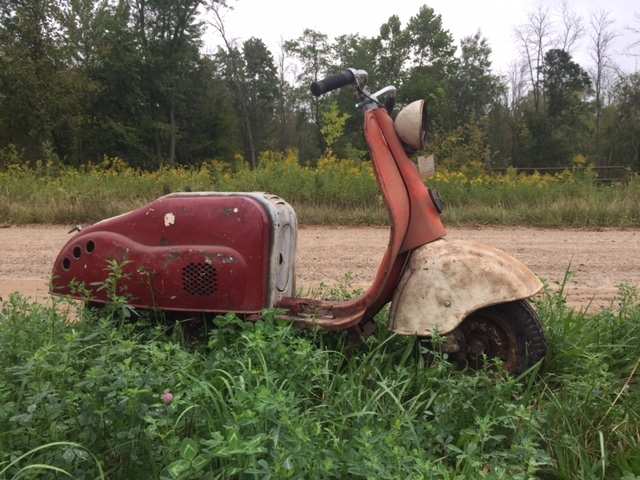 So after pushing the thing home I pulled the clutch to review the damage and the back bearing had pulled through the backing plate. My guess is on an earlier ride when the chain was thrown it locked up the sprocket hard after getting behind it and tweaked/tore the backing plate. Then over time it just ripped out. Surprisingly it was still kind of ride-able like this. Would not say it was happy to be ridden though. 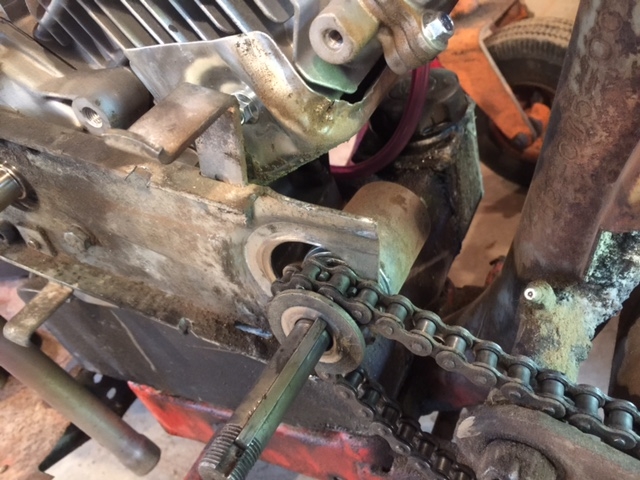 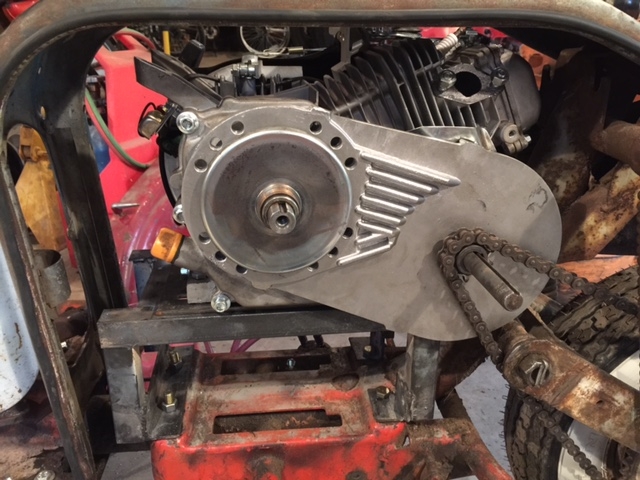 So new backing plate! Comet now only sells these big old aluminum plates which solved all the flexy clutch issues and is working quite well so far. You can see the new motor mount in the above picture. I made a tank that slides into that gap so the motor was no longer mounted directly on the tank which solved many problems and actually ended up being bigger and holding half a gallon more than a normal tank.

On the next few rides I replaced the tank with a new one, mounted the motor on a stand so it would not hurt the tank, and bought some new tires since the back was starting to separate due to dry rot on a ride and was getting pretty dicey. 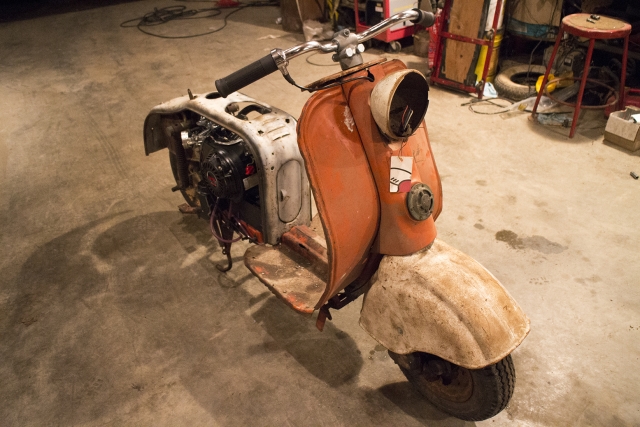 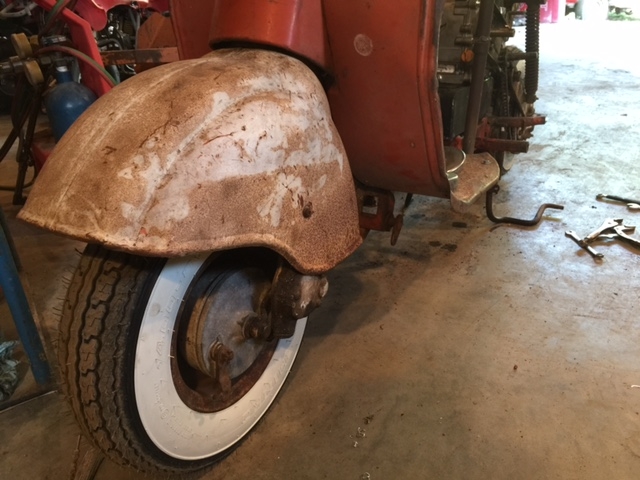 So this is the end of Part 1 of the C-75 adventure. I’ll get the new one up in the next month or so when things start to warm up a bit. Most of the bugs are worked out now and the Pigeon is quite happy to putter around the neighbor hood with its loud obnoxious straight pipe. For lighting I have a few Kohler parts setting on the bench at the ready, just need some time to install them. And once the lights are working I should be able to add an electric starter as well which will make things much nicer for just jumping on and scootin. As it is now having to pull a panel to pull start the motor is kind of clunky. Don’t be afraid to tear into any Pigeon projects you may have put on hold, these bikes were made to be ridden, even if that does mean cobbling them together like a 50’s cuban cab to keep them on the road.