At work today one of my buddys ran across a Youtube clip of an RC plane zipping around New York. This got me thinking about my old RC Lazy Bee that never got to fly and how cool it would be to get another one built to try it again. 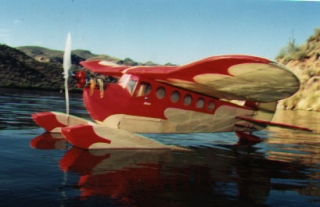 The reason I never let it leave the ground was a large fear that a kite eating tree from Charlie Brown was going to try to chomp on it or a brush patch would molest it. At the time I built it in 2000 or so I was still fairly young and didn’t have a job yet. That plane had a lot of my highschool savings wrapped up in it and was going to stay in one piece in my room safe and sound. And for that reason its still collecting dust, its poor little Trexler ballon wheels have rotted and cracked from setting so long. But after seeing that video above I really wanted to get another one as a test mule and send it in the sky. But that excitment was short lived when I looked around online and could not find any of the old Lazy Bee’s anywhere. For what ever reason I was really bummed about that. After jumping from a couple forum posts and message boards I found a post on Global Hobby that seems explains what happend to the partnership. There are no kits, no plans, and no planes left to sell. Theres a still a small cache of old kits that survived that turn up on Ebay from time to time but nothing you could just go and buy. For this reason the folks at RC Groups.com had started a thread on preserving and creating new Lazy Bee’s and the other planes from Clancy Avation.

Here is a zipped folder of all the plans that were gathered from posts in that thread, 32MB’s in size (Edit 2020-link removed, see below). I take no credit for any of this work, it belongs to the good people at rcgroups.com who will not let this neat little plane or its siblings fade off in to obscurity. Here is the thread in full http://www.rcgroups.com/forums/showthread.php?t=916960 . The plans included in this zip include; Big Lazy Bee Plans, Gyro Bee Plans, Lady Bug Plans, Micro Bee Plans The Little Plane That Could plans, Speedy Bee Plans, Stagger Bee Plans, Turbo Bee Plans, Yard Bee Plans, and of course the Lazy Bee Plans with multiple wing types, and floats.

Also here are some other usefull links. The company that makes the Lazy Bee’s funny little ballon tires http://www.trexlerballoonwheel.com/  The International Lazy Bee Homepage, these guys were around when I started building mine ten years ago, still a great source of information and mods to this fun plane. Heres a Lady Bug build, it was the Lazy Bee’s smaller cousain. A Speedy Bee Review.  The old Clancy Aviation Homepage.

I am beyond happy to share that Clancy Aviation is again selling planes and kits! https://www.andyclancydesigns.com/

Head on over there an support the Bee’s and get them from their home hanger. I’ve pulled the zip with the plans in it now that you can get them direct from the source, great to see the Bee back.