I present to you, the self destructing Pigeon 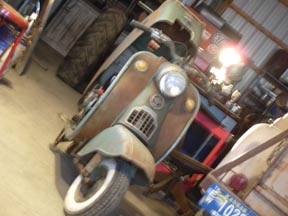 I think that when Mitsubishi designed these things it wasn’t so much as a post war re-industrialization project for Japan as it was a psychological weapon designed to harm Americans in the future. I was working on it for the last couple days swapping out engines since the one in it had a slight rod knock, and after getting it all back together it backfired on the first kick and sheared the flywheel key. Maybe they were never meant to be ridden, maybe they are more a stationary sculpture then a scooter. The other c-75 Pigeon I have is not getting its original drivetrain put in it after this crap, thinking of force feeding it a nice Honda CRF four stroke.