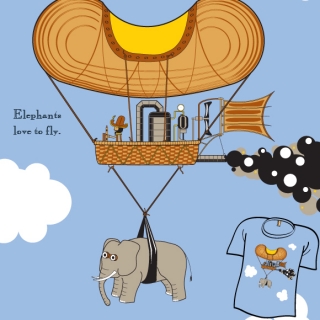 Also! I added a page to the site called Designs that will now house all these little shirt doodles in one nice spot, along with anything else that fits into that category. Links on the top left corner under about. And as an added bonus, from this point forward I’m going to be tacking on my sketches with the music I was listening too when I made the designs. Kind of like a small window into my thought process, which at most times is a horrible mangled mess of randomness. 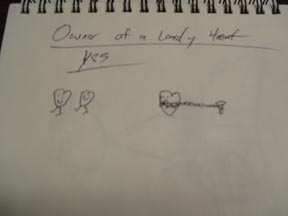 So heres the start. The competition was themed on hearts which is really kind of bogus, so I started jotting stuff down. Yes! “Owner of a lonely heart” for some reason popped into my head first, and stayed there for way too long. Next Mario chain chomps came up, which = heart chain chomp?!? Rolling on, this led to me drawing some actual heart outlines and eventually a wayward elephant ended up under one.

Seemed like a good idea, so it was fleshed out a little more as Electric Light Orchestra blared “Mr. Blue Sky” on repeat.

And that ended up making something very similar to the final design but left “Mr. Blue Sky” stuck in my head. Nine Inch Nails “Survivalism (Defy Mix)” was then called in to get ELO out of my freaking head. It didn’t work.