Ahoy ye scurvy dawgs! Here we be installing a Wiikey 2 into thar lil Nintendo! (Pirates put exclamation points on the end of every sentence, this is fact.) 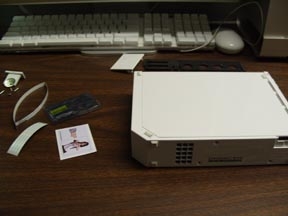 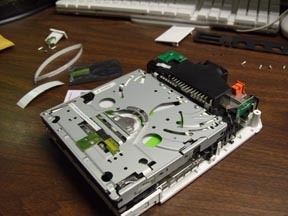 Not really what I was expecting to see in the lil Nintendo. Look at it! Its like 70% disk drive. 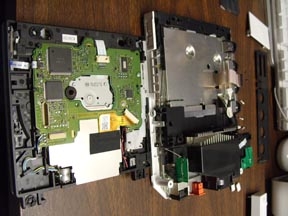 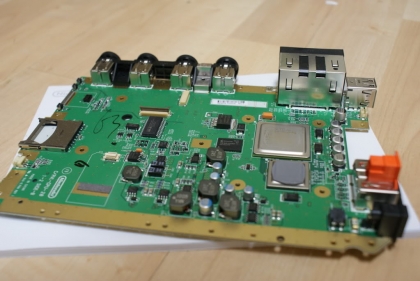 Now this is not mine, but this is the Wii’s main board. All of it. People constantly say how under performing the Wii is to other consoles of its generation, and it is. But look at it! look how tiny that thing is. Its amazing that it can render anything at all, let alone do Gamecube stuff as well. Crazy. 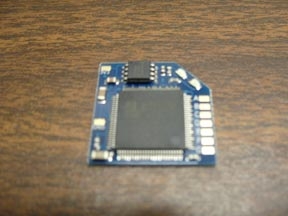 And heres the Wiikey 2 in all its little glory. Got mine from Canada Mods, was $23. Came with a phillips and triwing screwdriver set. Which, since they were free turned out to be pieces of crap. But they lasted long enough to get the job done and the fact that it came with them is pretty cool. 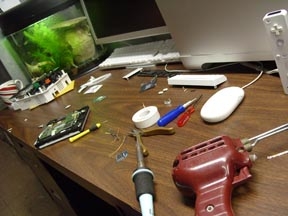 My desk looked like the Wii had barfed its innards all over at this point. 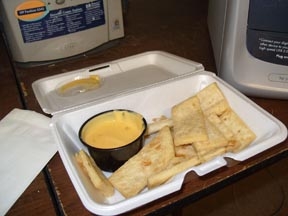 Then I was starving, so I called Baileys and got a yummy order of PJ’s to go. Who ever thought that deep fried flat bread and cheese could taste good!

Okay got the chip in, all 5 wires solder in place, and now just smothered the thing in electrical tape. I was mostly trying to get the wires I had solder to stay in place so they wouldn’t break off the freaking tiny tracers that they had been put on. You will need a good iron for this. I tried using my trusty Wen, but it was like using a sledge hammer to drive in a trim nail. Ended up borrowing Jesse’s Weller with a needle point end. The wires had to also be a really tiny gauge since the solder points were really small on the Wii’s controller board. I was originally going to use some CAT-5 wires but even they were too big. Finally found a discarded laptop LCD video cable that I cannibalized.

All done! And I didn’t kill the Wii, shazam!

So if you don’t know what a Wiikey is, its basically a mod chip that takes out the copy protection from the Wii’s drive allowing it to run burnt DVD-R or DVD+R burnt disks. So you could make a copy of one of your games, store it somewhere safe, and use the burnt disk. Or, download .iso’s off the shady back alleys off the internet and burn them. My stance on this: I’m still going to buy the games that I would normally buy. But this gives me the option of trying out other games that I would normally pass over, or not consider since my budget for new titles is pretty tight. And the thing that keeps me from just out right stealing them and not buying them is the simple fact that if you give your money to people whos games you like, they will make more! Isn’t that crazy? Supporting the people you like, like 2D Boy’s World of Goo. Or The Behemoth.

So there ya go.